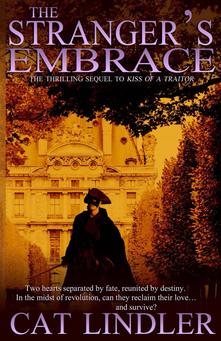 In this sequel to Kiss of a Traitor, Wilhelmina Sinclair lives under crushing grief in the year since her husband’s ship sank off the French coast. Desperate for something to occupy her mind, she seeks solace in her friend Emma, and together they travel to Paris in an effort to free Emma’s relatives being held as political prisoners. Though Willa is fearless, often reckless, she is unprepared for the hell storm that is Paris in 1792, a city in thrall of the Revolution’s new toy: Madame Guillotine. Adding to the horror of the daily executions and the dread of arrest at any time, Willa attracts the attention of a mysterious masked man who stalks her relentlessly. Cloaked in black, he is known only as L’Etranger, The Stranger, Robespierre’s bloodhound and bodyguard, and the most dangerous man in France. What does he want of her? And why does his presence make her heartbeat quicken with anticipation, rather than fear, whenever he draws near?

L’Etranger remembers shouts of “Sabotage,” the fiery explosion of a ship, and the inrushing sea. All else, even the memory of his name, are claimed by the fire and the water, although he has a lingering pain of lost friends who surely died on that ship. He knows he must avenge their deaths. Using a mask to hide his gruesome scars, he makes his way to Paris and places himself close to Robespierre, the one man who can help him flesh out the truth and uncover the saboteur assassin: a traitor he assumes lies within the cabal of counterrevolutionaries. Then his secret life is threatened by the appearance of a woman, one who triggers his memories. He watches as she joins the ranks of the men he believes to harbor the saboteur, but revealing himself to her would not only compromise his position, it could expose his monstrous appearance. From the shadows, he soon realizes that she, his one true love, is in imminent danger. Every day brings her one step closer to the guillotine. He must somehow convince her to leave Paris, and if he cannot, he must help her in her quest, even if it means his own death.

During an 1891 voyage to an uncharted isle in the Furneaux Islands near Tasmania, Richard Colchester, sixth Earl of Stanbury, finds a living saber-toothed tiger believed to have been extinct for over 10,000 years. His sighting of the Smilodan will astonish the world…that is, if he ever makes it back home to England.

When Lady Samantha discovers that her esteemed uncle Richard has disappeared under suspicious circumstances, she enlists the help of Professor Christian Badia, a famous zoologist and animal tracker who specializes in wild cats. Not only does she plan to organize the rescue expedition, she insists on joining the treacherous search.

Christian is a notorious recluse who despises the British aristocracy, particularly pushy aristocratic women, so the last scenario Samantha anticipates is a romantic interlude. Nonetheless, Samantha is drawn unexpectedly into a world of physical passion. She comes to realize the enigmatic man is her soul mate, but when Christian must embark on his own dangerous assignment, Samantha realizes she may forever lose her newfound love. Unable to sit and wait, Samantha launches her own investigation—and finds herself in grave danger.

Will Christian find her…before it is too late?

Wilhelmina Bellingham is an ardent Tory and has two goals in her young life: catching the American traitor, General Francis Marion, known to many as "The Swamp Fox," and avoiding marriage to the fool to whom her father, Colonel George Bellingham, betrothed her when she was only a babe, to a man neither she nor her father has ever met. Her first goal is within reach. Willa knows South Carolina’s swamps and byways as well as any rebel. With judicious searching and a large dose of luck, she will eventually catch the partisan general. Her success will compel her father to acknowledge her worth and to realize he can take as much pride in a daughter as in any son. Shedding her betrothed is another matter. The foppish Aidan Sinclair, Baron Montford, is harder to shake loose than a deer tick, even after Willa subjects him to a series of mishaps calculated to drive away the most persistent suitor. His lordship may be more than his appearance would indicate, but she has no desire to uncover the man beneath the lace and silk exterior. She will not marry without love, and Aidan Sinclair is not the sort of man to inspire love.

Captain Brendan Ford, a spy with Marion’s patriots, stumbles across the perfect way to infiltrate the Loyalist high command when his half brother is killed shortly after arriving in Carolina. Ford assumes his brother’s identity as Lord Montford and fiancé to Wilhelmina Bellingham. But his masquerade requires he actually court her, and the untidy little wren of a girl is not a female to inspire courtship. Soon Ford begins to have the strangest feeling Wilhelmina is trying to kill him. But he perseveres, knowing his ruse will end as soon as the patriots drive the British back across the ocean.Through military battles, deception, betrayal, and an undeniable attraction to one another, a Tory and a Patriot must discover what matters most to them--political loyalty or love. 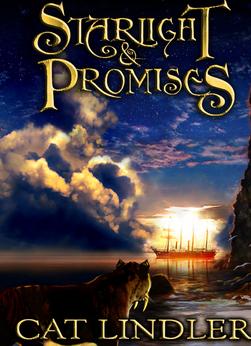 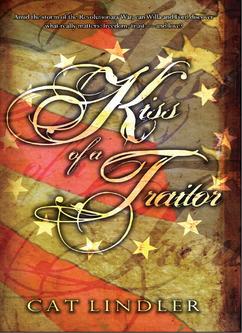