La Lobo Fantasma, the bandito known as the Ghost Wolf, rides the high Mexican desert, seeking revenge against the devil who destroyed her soul and her body; one who made sure she would never trust or love any man. From the bounty she robs off his silver trains, she loads her gun with silver bullets: two for the hands that mauled her, two for the legs that held her down, one for that part of his anatomy that destroyed her innocence, and the final one for his black heart.

Dillon West, ex-Texas Ranger, accepts a commission to stop the depredations of the notorious Ghost Wolf on Thorne Railroad. He questions his commitment to his mission when he encounters the bandit leader: a cold, beautiful woman with a scarred face and a past full of secrets. As he rides with the banditos across the Mexican altoplano, the Ghost Wolf steals more than silver; she also steals Dillon's heart. Now Dillon must find a way to help her bury her pain and learn to love without fear.. 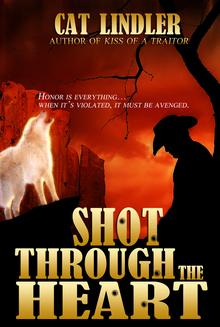 Dillon pushed Chaz against the dark side of the nearest pillar, her back to the rounded marble, his chest against hers. When she squirmed, he took her hands tightly in his, holding her arms motionless at her sides. He pressed his lips to her ear and whispered, “Shh.”

The soldiers fanned out into the church, booted feet clomping down the main aisle and along the sides of the pews. Three or four men, and careless at that. Voices raised in talk, questions, and laughter bounced back and forth. If Dillon and Chaz had wanted to add the soldados’ number to those killed by the Ghost Wolf, it wouldn’t have been hard. But this was no night for killing. Therefore, Dillon didn’t dare peer around the curve of the pillar. The candlelight could quickly reveal their position if a man was glancing their way. So they remained motionless, a part of the stone, pressed even more tightly against each other.

The softness of Chaz’s body beneath her leathers, her small breasts squashed against his chest, made Dillon’s thoughts wander away from the soldados and to their situation. He released her hands and held her face between his palms. In the blackness of their hiding place, he couldn’t see her eyes. Nonetheless, her breathing quickened, chest rising and falling rapidly, breath soughing across his cheek, and the slow lope of her heart accelerated into a gallop.

Now Dillon had Chaz where he wanted her, at a place and time where she couldn’t back away, couldn’t threaten to geld him. In some way, it seemed fitting. For once, she feared capture more than she feared the touch of a man.

“If they see us,” he whispered into her ear, “pretend we’re lovers.”

Her body trembled, but she nodded.

Would I be a snake to take advantage? A tiny needle of conscience pricked him. Ah, hell.

Dillon slid his mouth slowly across the slope of her neck, landed soft kisses on her eyelids—closed, he noticed—and settled in on her mouth. Her head shook slightly, but her lips were slack, barely parted. No real struggle, no resistance. Chaz could bite his lip if she really wanted to. Perhaps she feared he’d make a noise that would betray them to the soldiers.

Her mouth gradually opened wider, and Chaz sighed into the kiss. Her rigid body became soft, pliant. Dillon released her head and skimmed his hands down the sides of her neck. He unraveled her braid, sifted through her long hair, and moved his palms across her shoulders and down her arms. He kept the kiss light, nonthreatening, more exploratory than ravenous. However, he couldn’t stop his tongue from dipping into her mouth on a foray to taste her sweetness.